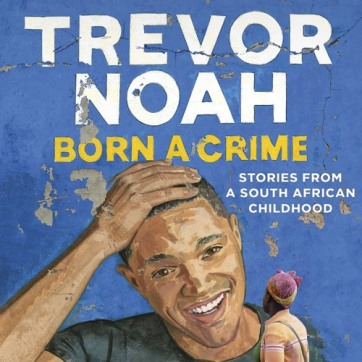 Jon Stewart’s departure from The Daily Show was met with the kind of trepidation that greeted Johnny Carson leaving The Tonight Show or Suzanne Sommers leaving Three’s Company. Okay, Suzanne Somers is probably a bad comparison. Perhaps it’s closer to the guy who played Mr. Kotter leaving for most of season four of Welcome Back, Kotter. Well, that’s an even worse example, so I’ll just go with Johnny Carson retiring. A lot of Tonight Show fans could not imagine watching it without Johnny, and many of them never warmed up to Jay Leno. I felt the same way when Jon Stewart announced he was leaving The Daily Show. Why didn’t they hire John Oliver to take over before HBO nabbed him? Why not give the hosting duties to Samantha Bee? But the biggest question I had with Trevor Noah taking over was that I had never heard of him. The first night he was on the show I remember thinking “Who is this guy?” but also thinking, “And he’s South African. That’s interesting.”

I didn’t realize how interesting until I listened to his memoir Born a Crime: Stories from a South African Childhood. One of the things I realized while listening to the book was the gap I had between knowing about South Africa, Nelson Mandela, and apartheid in the abstract and learning about someone’s firsthand experience growing up during apartheid. Listening to the book now, it’s hard to imagine how South Africa kept its brutal system going for so long. The title of Noah’s book comes from the fact that the relationship his mother, a black woman, had with his father, a white man, was literally a crime. This led to many complications but few that Noah’s resourceful mother couldn’t handle.

In his teens, Noah turned into something of a hustler as this was one of the few ways he could find to make money. He initially started making money by sprinting across his school’s campus to get to the front of the cafeteria line. Once in line, he would buy food for the wealthier students who were too lazy or too cool to sprint to the front. He took extra money from them for his services.

He eventually moved on to selling copied CDs to mini bus drivers and working as a deejay at parties. He also ran some more questionable money lending operations with a group of his friends, but they were never the type to go as far as breaking someone’s legs.

Noah reads the audio book himself and, unlike a lot of authors who read their own work with the enthusiasm of Ralph Nader, Noah is great at telling his story. His voices and timing are impeccable. The only thing I wish Born a Crime hadn’t left out was how Noah ended up landing The Daily Show job, but I suspect this will not be his last book.