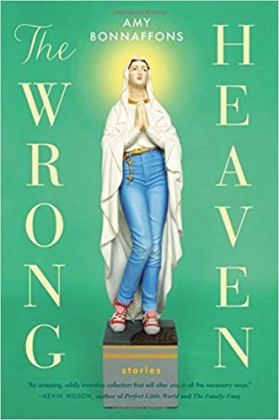 I first heard Amy Bonnaffons when her short story “Horse” was read as part of an episode of the National Public Radio show “This American Life.” I don’t remember what the theme of that particular episode was or any other segments, but “Horse” stood out. It is a short story about a woman deciding to transition from being a human to being a horse. The story moves back and forth between the narrator talking about her transition from woman to horse, such as the day hooves first replace her feet, to a series of questions and answers, like something out of an informational pamphlet. Regarding a question about whether or not someone’s loved ones can ride her once she has transitioned to a horse, a process referred to as Equinification, the answer the pamphlet gives is “We don’t recommend it. So far, every attempt has ended in tragedy.”

Another story in Bonnaffons’ collection The Wrong Heaven, “A Room to Live In,” the woman who narrates the story makes doll houses and miniature figurines. Two of them, Otto and Gretel, come to life and start talking to her. She has a hard time getting them to behave the way she would like them to. She also does not want her roommate/boyfriend Carl, a piano tuner, to discover Otto and Gretel. While all this is going on, Carl keeps asking the narrator if they can sleep in the same room and if they should have a baby. The narrator thinks that “I still couldn’t imagine sharing my bed every night, let alone having a third person in the apartment, someone possibly very loud, who oozed bodily fluid and need.” Her complete bafflement about adult life and her obsession with Otto and Gretel jar with Carl’s rather mundane requests.  “A Room to Live In” could come off as whacky gibberish, but Bonnaffons crafts the story in a way that opens it up to multiple interpretations.

If there is any weakness with The Wrong Heaven, it is that at times it reads like a first short story collection. Along with bizarre stories like “Horse” and “A Room to Live In” are stories like “Doris and Katie.” This story of two aging friends facing different kinds of death reads more like an Alice Munro story than one of Bonnafons’ Kafkaesque fever dreams. When these more realistic stories are thrown in, the collection can read like a young writer trying to find her voice. But this is a minor complaint. Her first novel, The Regrets, is coming out next month, and I’m anxious to see what she can do with a bigger canvas.